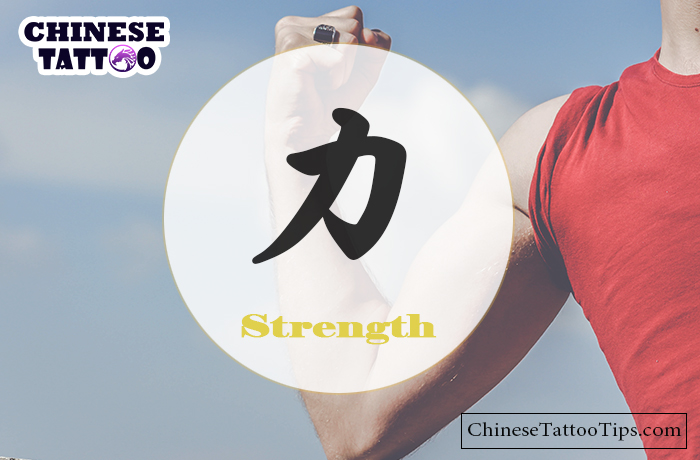 By the way, I am trying to be the best and only authorized website for Chinese tattoo advice, if you have any specific question, you can comment down below, or E-mail me directly.

Commonly, people want strength in Chinese tattoo, who doesn’t. There are several words in Chinese characters with the corresponding meaning of strength. Here is the one that I picked, I think this is the most suitable one for tattoo design.

My choice for strength in Chinese tattoo

why it is good?

As you can see, the single letter 力 can be interpreted into meanings like force, strength, or power, so for me, it’s a deep meaningful word for me.

Proper compared to other options

Translate “strength” from English to the Chinese language will get many different results, but after the research, all of them are not better than 力.

For example, firstly we have 力量 (lìliàng)，means “force or power to do”. but it is often used on formal occasions. It is not suitable for tattoo design.

Secondly, you have 力气(lìqi), it is used in a more everyday expression. It is also not suitable for a design for strength in Chinese tattoo.

The letter 力 for strength in Chinese tattoo itself has sharp and clean lines in terms of the graphic, and it will be much cooler for a tattoo will proper calligraphy design.

Many celebrities in China have the “strength” 力 tattoo, which proves that it is a good tattoo design. Strength in chinese tattoo is a popular topic in china.

Calligraphy plays an important role in Chinese tattoo design, and bad calligraphy, like directly use Arial Font will ruin everything. So here I will provide some tattoo design with proper calligraphy.

However I will do a PSD Photoshop file for you to download if you require it via comment or E-mail.

The third point, don’t srength in Chinese tattoo with other kanji

We know that there is a divide between different languages, and this applies to Chinese characters as well. It is absolutely wrong to choose a few English words and then translate them, and then string the translated Chinese characters directly together. Promise me you will never do this again, okay?

not to mix strength in Chinese tattoo with other Chinese symbols

We know that there is a divide between different languages, and this applies to Chinese characters as well. It is absolutely wrong to choose a few English words and then translate them, and then string the translated Chinese characters directly together. Promise me you will never do this again, okay.

Why is this bad? Because it’s completely out of line with everyday Chinese language habits, so it looks like a mistake, and I’m sure you don’t want your tattoo to look like a mistake.

Some readers may want to translate some Chinese tattoo symbols, you have two options, first, you can send me an email and I will help you as much as I can, or you can look for answers online. Below I list some of the websites that I usually use, and I hope they will be helpful to you.

1 thought on “Strength in chinese tattoo, get the free translation in 2 minues”